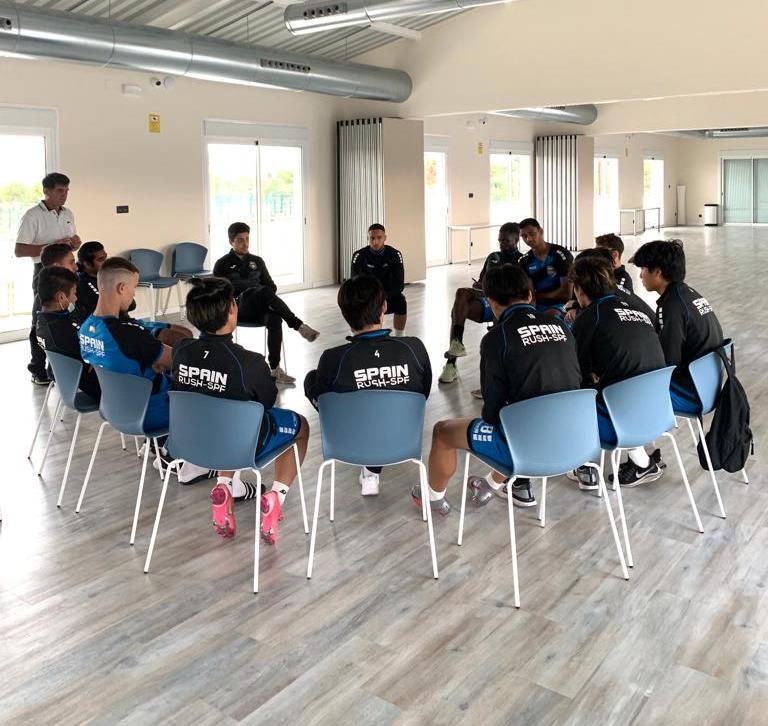 In our soccer academy, we learn how to play soccer and also how to become better with team building.

We were honoured that Russell Grocott (Director at PAM Education, IACCA, Lu Ban Restaurant and Owner of Futelite Ltd.) was holding a team building event on Friday morning for the players of the soccer academy.

We started the session in the event room of the training centre, where the players had to form teams. Each team received a card and had to follow the instructions written on it. Later, we all went to the pitch and did teamwork tasks that were mixed with football exercises. Working together as a team breeds a healthy competitive edge that can only bode well for the team and everyone within it.

Teamwork in sports allows your members to work together to achieve a common goal. For example, that might be winning the league, getting one over on a rival, or simply improving as a team.

Clear objectives play a big role in any team, that wishes to reach goals. Ability to identify main approaches on each task define success, failure and helps to achieve goals more productively.

The understanding of each team member’s respective roles is a big part of clarifying your own. The role clarification motivates each to focus on their own role. Then, the tasks of the others should not distract you. Team success comes from reducing ambiguity and understanding the importance of the structure.

After improving the ability to identify problems within the team, team develops the skill of working together and finding solutions to ongoing problems.

Communication, sharing, giving, and receiving support within the team, or simply – teamwork, gives a huge advantage to the team members, that are not capable of keeping harmony within it. Teams with fewer interpersonal conflicts, overall, are functioning more efficiently and stay productive over longer periods of time.

Examples of teamwork in other sports

Look at this incredible feat of teamwork during a 2010 Oklahoma-Oklahoma State football game. Broderick Brown flies out of bounds and tips a Landry Jones pass over to teammate Shaun Lewis for the interception. Brown’s example of self-sacrifice and risk-taking, also combined with Shaun Lewis’s ability to follow, anticipate, and execute with intuition, provides an impressive moment from which to learn. There’s of course maybe some luck thrown in there, but without a high level of precision, all the luck in the world doesn’t help.

Developing relationships and building trust is essential to developing team confidence and working with others effectively. By knowing and trusting your teammates, you increase opportunities for collaboration and gain confidence. Indeed, you know that the team supports you even in risky situations like Broderick Brown’s. Finally, building that trust requires honesty and integrity, caring, competence, and consistency in doing what you say you will do.

It is obvious that Dwayne Wade is completely dedicated to the goal of winning the game. For example, here you see him at the 2008 Beijing Summer Olympics sacrificing some personal glory by assisting Kobe Bryant, who swiftly dunks the ball. Wade had a strong awareness of where his teammates were at that moment. He thought a few steps ahead to utilize Kobe in order to reach the team’s goals. Bryant also had the intuition and skill set that prepared him to perfectly execute.

All the sports need it!

High-flying antics like this Wade-Bryant play represent a strategy widely used nowadays by almost every basketball team. An acrobatic dunk of this variety can make a powerful statement against the opposing team if the timing is right and can also whip a crowd into a frenzy. In other words, making strategy everyone’s role by articulating clear, simple goals and directives will help everyone focus better on how to reach those benchmarks.

How do stars use team building?

Wayne Rooney was known to extend his captaincy duties away from the pitch in what was described as ‘Team Bonding Sessions’. Rooney understood the importance of the integration of new players with a particular need for foreign players.

His interpretation of team building had included several ‘team-bonding‘ nights with their wives and girlfriends. Rooney believed it was important for the families of players to interact. He explained: ‘’If they can do that, it will certainly help players settle in a lot quicker. I felt it was important for the team and for the lads to enjoy themselves’’.