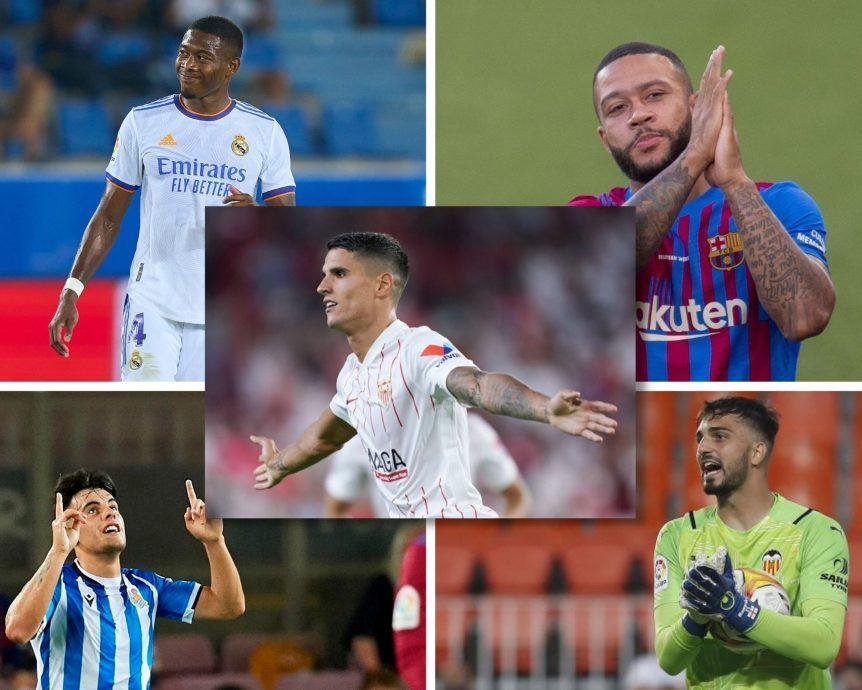 The new LaLiga Santander season kicked off on Friday, August 13, as Valencia took on Getafe. Just over a month after the end of Euro 2020, players are back in the pitch and fans are finally back in the stadium. However, the stands are only filled to 40% of their capacity. It’s a good news when you know how important soccer is in Spain

The top four from last season all kicked off their campaigns with victories. Barcelona started the post-Messi era with a 4-2 win over Real Sociedad, Madrid easily defeated Alaves 4-1 thanks to a Karim Benzema double. Sevilla and Atletico Madrid won 3-0 and 1-2 respectively against Rayo Vallecano and Celta Vigo.

Before that, Valencia made a successful start by beating Getafe 1-0 despite an early red card for Hugo Guillamon after only 31 seconds!

The other 5 matches ended in a draw.

They made their LIGA debut

New season and new faces : five of them particularly shone for their debut in this LaLiga.

Recruited to play in the centre, he was positioned at left-back, very good defensively as well as offensively. He crowned his performance with a great assist for Vinicius Junior late in the match.

While no player could ever replace Messi, the performance of Memphis Depay certainly gave Barca fans cause for positivity after a dark few weeks for the club. The Dutch international seems already well integrated, he has been a constant danger for the opponent’s defense. He delivered an assist to Pique to get a deserved lead. The only thing missing was a goal.

The former Tottenham player enjoyed an ideal debut with Sevilla FC. The 29-year-old came off the bench at the break and scored twice in a 3-0 win at home to Rayo Vallecano.

After being promoted to the second division with Xabi Alonso’s Real Sociedad B, yesterday, Lobete made his debut in LaLiga. In one of the first balls he touched, the young striker sent the ball into the back of the net protected by Ter Stegen.

The 3rd goalkeeper found himself in the starting line-up following injuries to both Cillessen y Jaume. He allowed his team to win despite a red card in the first minute. The young Georgian goalkeeper has been heroic and it will be difficult to remove him from the team if he continues like this.

Who will win this year?

The last time one of those three hasn’t won La Liga was 18 years ago. They’ve finished in the top three in various orders for the last nine years.

The defending champ, Atletico Madrid, didn’t lose any key players. They even recruited Argentine Rodrygo de Paul who shone during the Copa America this summer. Simeone’s men can be trusted to defend their title.

It was a turbulent summer in Catalonia, Barcelone said goodbye to his iconic Messi. It didn’t solve all the financial problems, far from it. President Laporta has estimated the club’s debt at 1.35 billion euros. However, the Blaugrana still have a very competitive team full of talents.

Real Madrid have also let some important players go : Ramos and Varane, who had formed the heart of defence for the last ten years. Carlo Ancelotti’s reputation as a player-friendly coach will keep his team hungry and with star players like Karim Benzema, Gareth Bale or even Eden Hazard, Madrid remains a serious contender for the title.

If these three are obvsiouly favourites, Sevilla, Real Sociedad and Villarreal are next in line with distant hopes of potentially challenging.