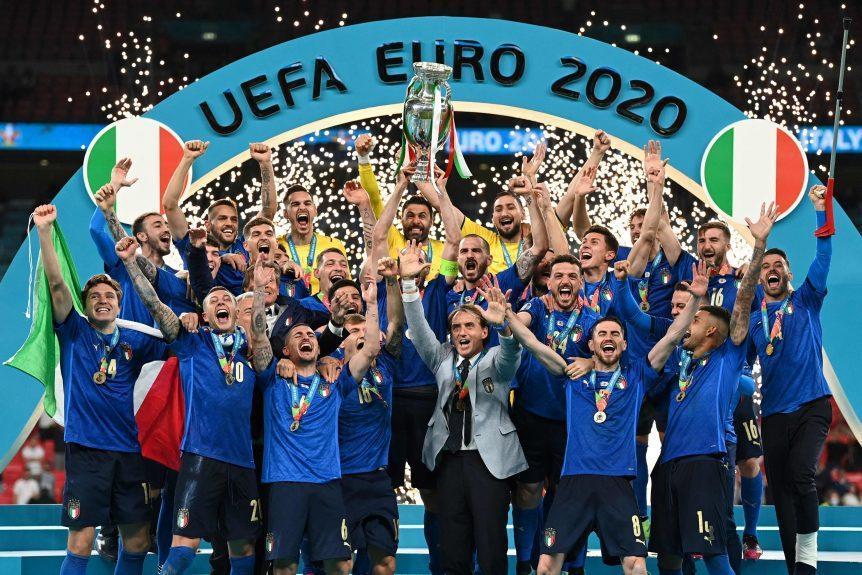 After a nerve-wracking night, Italy managed to win the Euro 2020 title at Wembley. After winning their way to the final by defeating Spain in the penalty shootout round, Italy did the same again against England, defeating England on penalties (1-1) in the cathedral of football to win the second European Championship in their history. For most of the match, it was England who was leading 1-0, but Bonucci scored the 1-1 in the 67th minute from a corner. It was taken by Berardi, headed in at the near post by Cristante, Verratti headed against the post and Leo smashed home the rebound.

“If I had faith in this team when I arrived three years ago, I have even more now.”

Mancini had a dream and never strayed from it.

He thus became the oldest goalscorer (34 years and 71 days) in a European Championship final.

England’s Gunner midfielder missed. Saka hit it hard, low and left-footed to the right, but too wide. The former Milan goalkeeper guessed right and sealed the tournament with his save.

At just 19, Bukayo Saka experienced one of the greatest moments of responsibility in a footballing career. The Arsenal player was chosen to take the fifth penalty in the shootout that decided the European champion. At Wembley, against Italy and the best player of the tournament, Gigi Donnarumma.

In that fifth penalty, England’s hopes of winning their first European Championship and also breaking a streak of more than 50 years without a win were dashed. The stage, Wembley, was unparalleled and ready, but Italy crashed the party and is the new European champion.

Italy is back. Or rather, it never left. The victory over England at Wembley confirmed with a trophy the new airs that are coming to the Azzurri.