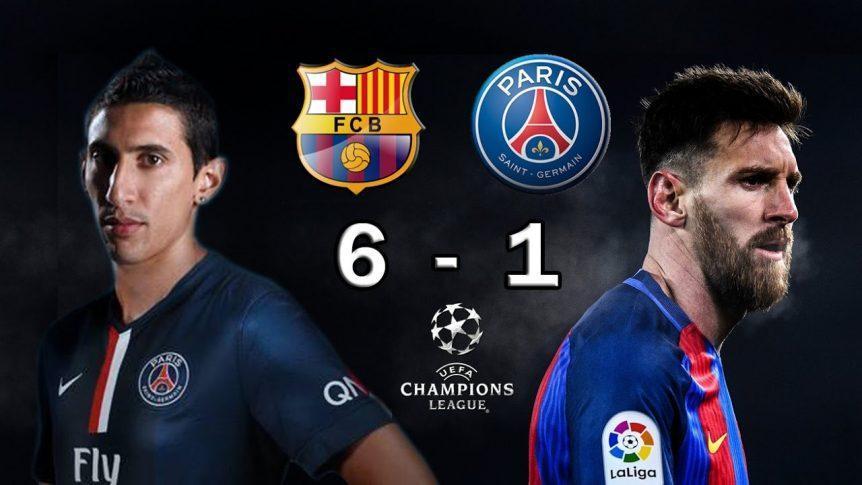 1/8 of the Champions League 2016/17, matches between PSG and Barcelona. March 8, 2017, is remembered by many fans of FC Barcelona and FC PSG. And this is not a surprise, because on this day FC Barcelona made a comeback scoring 6 goals against the Parisian club. In the last few minutes of added time, the Catalans scored 3 goals, and Sergi Roberto’s goal from Neymar will remain in the fans’ memory for a long time.

On February 14, in the 1/8 finals of the Champions League, PSG scored 4 goals against FC Barcelona, almost killing the Catalan club. FC PSG was one step away from reaching the next round of the Champions League as they simply needed to maintain the difference in goals in the second round at the Camp Nou. But the Parisians failed to maintain the advantage since from the first minutes Barcelona was ready to make a great historical comeback. In the third minute of the match, Luis Suarez scored a goal against PSG, then Layvin Kurzawa scored a goal by mistake into his own football gates with the help of the greatest Andrés Iniesta. Then a penalty from Lionel Messi, a goal and a penalty from Neymar. And of course, the final goal was not just a goal, but a masterpiece from Sergi Roberto.

Barcelona made a comeback that all fans remember with trembling and joy.

1/4 of the Champions League 2003/04, matches between Milan and Deportivo. In the first match on March 23, 2004, at San Siro, Deportivo was the first to hit the goal. On the 11th minute, Walter Pandiani scored a goal against Milan, but the continuation for the Spanish club was very sad, as the Italian club literally beat the Spanish Deportivo with four goals in a few minutes of the second half of the match. Kaka scored the first goal in the 45th minute, in the 46th minute Andrew Shevchenko hit the gates of Deportivo for the second time, in the 49th minute Kaka continued the
attack and scored the third goal, and a bit later on the 53rd Andrea Pirlo scored the final fourth goal of this match. Deportivo “lost the battle, but did not lose the war”, as the second match in La Coruña was developing in a completely different way.

From the first minutes of the match, Deportivo went on the offensive. As a result, 4 goals against Milan and 1 away goal let Deportivo won and pass to the Champions League semifinals. Amazing result!

1/2 of the Champions League 2018/19, matches between Barcelona and
Liverpool. It was in the 2018/19 season that Liverpool won the Champions League, but it was not that easy. But really, a miracle was happening at Anfield stadium. On May 1, 2019, at the Camp Nou, Barcelona confidently beat Liverpool thanks to goals of Luis Suarez and a double from Lionel Messi. The Catalans were ready to pass to the final, but an unpleasant surprise awaited them in the second match in Liverpool on May 7, 2019. At Anfield, Barcelona made a large number of mistakes which lead to 4 goals in the gates of Marc-Andre Ter Stegen. This was a very sad and unexpected
result, but we can say that it was deserved. And we can say: “Barcelona is still waiting for the whistle from the referee for a free-kick from Wijnaldum”.

In our high-performance football academy, we enjoy these matches and we know that for our players it is a special moment too, so whenever matches of this category are played in Valencia we bring our players! We hope you found this article interesting. If you have any more comebacks that you think should be on our list don’t hesitate to leave us a comment telling us what it is and why it is so.