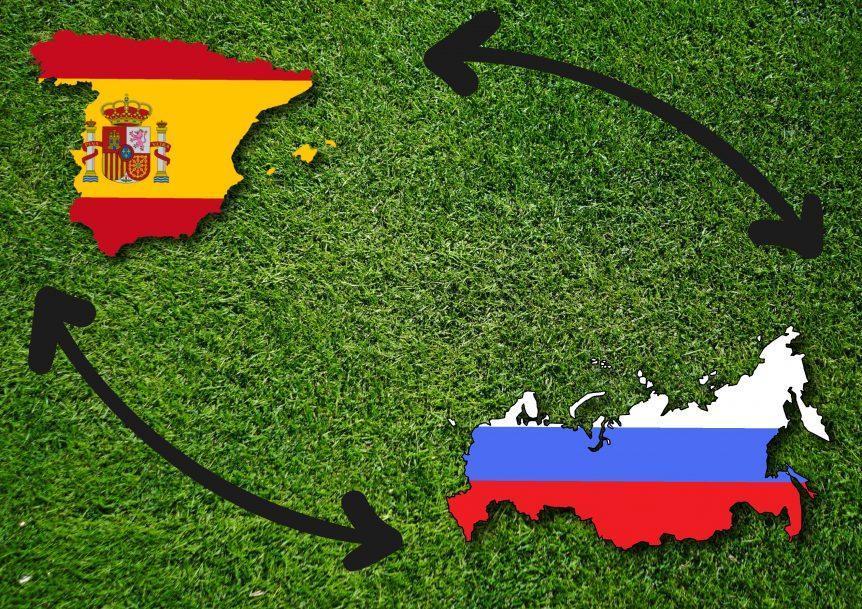 Foreign football players play in various football leagues outside their country of citizenship. Russian football players showed their skills in Spain at the end of the 20th century and they do it to this day, along with their Spanish colleagues in Russia, who conquer the Russian Championship. Today we are going to talk about those foreign players who showed their professionalism in Russia and Spain [1].

Francisco Javier García Fernandez or simply Javi Garcia from 2014 to 2017 played as a midfielder at the football club “Zenit” in the northern capital of Russia – Saint Petersburg.

For several years Russian public fell in love with the Spanish football player. Javier Garcia moved to the Russian club from the English “Manchester City”. For FC “Zenit” Javi played 108 games and scored 7 goals. In addition, as part of “Zenit”, he became the Champion of Russia in the season 2014/2015, won the Russian Cup and the Russian Super Cup in the season 2015/2016. In 2015, Javi Garcia was recognized as one of the best football players in Russia (ranked second among the 33 best football players in Russia), and at the end of the season 2016/2017, he was recognized as the best player by the fans of FC “Zenit”[2]. Everyone would agree that Javier Garcia’s football career in Russia was quite successful.

César González Navas spent 9 years in Russia playing for two football clubs as a defender. From 2009 to 2015 and from 2017 to 2018, Navas played for FC “Rubin”, where he finished his professional career, and from 2015 to 2017 he played in the south of Russia at the football club “Rostov”.

During his career in the Russian Championship as part of FC “Rubin”, César Navas became the Champion of Russia in 2009, won Russian Super Cup in 2010 and 2012, as well as the Cup of Russia in 2012. In addition, Spanish football player became one of the best footballers in Russia for three times: in 2009 he was the second, in 2010 he was the third, and in 2017 he became number one. For 9 years in the Russian Championship he played 250 games, in which he scored 4 goals and during his long professional career in Russia, César Navas become a truly Russian football player[4].

Mostovoy devoted 8 years of his professional career to play for the Spanish football club “Celta”, for which he played from 1996 to 2004. Alexander Mostovoy began his football career at “CSKA” and “Spartak (Moscow)”. Russian football player played as a defender and played 285 games in 8 years, and scored 72 goals. Alexander Mostovoy’s career in Spain was very successful and in Spain, he became famous for his performance in “Celta” and received the nickname “The Tsar of Balaidos” from the fans of the Spanish club[6].

Like Alexander Mostovoy, he conquered the Spanish championship. Valery Karpin’s career has been very different, as he spent 11 years of his professional career in Spain. From 1994 to 1996, Russian football player played in FC “Real Sociedad”, from 1996 to 1997 in FC “Valencia”, from 1997 to 2002 he played in FC “Celta”, and from 2002 to 2005 he again continued his career in FC “Real Sociedad”. For 11 years in Spain Valery Karpin played 442 games and scored 80 goals. Without a doubt, Valery Karpin’s career in Spain was very successful.

He is the only Russian football player who still plays in the Spanish Championship. Denis Cheryshev’s football history began in Spain when his father Dmitry Cheryshev moved with his little son to play in the Spanish Championship. Cheryshev Jr. in his adult professional career, that started in 2012, played in such football clubs as: “Real Madrid”, “Sevilla”, “Villarreal”. At the moment, Denis Cheryshev plays in the football club “Valencia” as a midfielder. He has played 279 games and scored 43 goals. Denis Cheryshev has already become a Spanish football player with Russian roots, who is well known among Spanish fans[7].

[2] This list of players is compiled for informational purposes only and is not an assessment.